About the Florida Regulated Cannabis Program

Florida Marijuana: In the elections of November, 2016, a constitutional amendment was passed to permit the use of medical marijuana in Florida. Since then…

There are now over 700k Floridians with active medical marijuana cards, over 2800 doctors in Florida are certified to recommend, and the number of Open FL dispensaries has crossed 500. If we were talking about this in 2014, No Way. This guide will bring you up to speed if you are unfamiliar with Floridas medical marijuana program.

It took a minute, actually years, although smokable flower in Florida was added by state law to the acceptable forms of use.

Smoking accessories can be purchased at most cannabis dispensaries. If you don’t have a dispensary close by, or you live in a state that has none, many smoke and vape shops carry papers, pipes, bongs, and other accessories. These products can all be purchased online as well.

How to get smokable whole flower marijuana now in Florida - Instructions

Steps To Get a Medical Marijuana Card in Florida

It should go without saying that you should arrive at your appointment on time and make sure you have your medical records and I.D. If all goes well, the doctor will see you shortly.

The doc will ask you a series of questions about your ailment including your diagnosis, what symptoms you’re experiencing, which treatments you’ve tried in the past, what you’re doing currently to treat your condition, and anything else they deem relevant. If the doctor determines that you are, indeed, eligible for the Florida medical marijuana program they’ll enter your info into the Florida Marijuana Use Registry which is run by the Florida Department of Health.

Your doctor will determine an optimal THC dosage and flower limit which in turn sets a limit to how much product you are allowed to buy each month. A doctor may also limit your meds to low-THC products if he or she thinks there might be safety issues with the use of high-THC products.

Once you’ve gotten the all clear from the doc, and you’ve been added to the Medical Marijuana Use Registry you’ll still need to complete the process online before you receive a card by mail.

You’ll also be required to remit a $75 application fee.

What are the Qualifying Conditions in Florida for Getting a Medical Marijuana Card?

When Florida first enacted a very limited medical marijuana program back in 2014, the only qualifying medical condition was severe epilepsy or a terminal illness. Voters approved an initiative in 2016 which amended the state’s constitution to not only expand the medical qualifications of the program but also to create a state-regulated medical marijuana market. 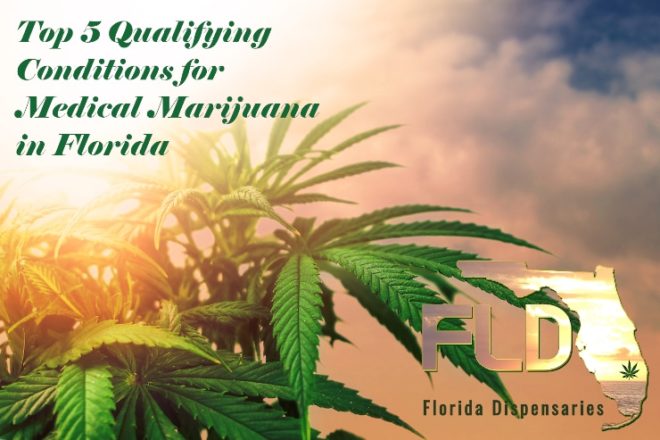 The History of Florida Marijuana Laws

Several attempts were made to legalize medical marijuana in Florida between 1978 and 2014 with no success. Then, in 2014, Florida legislators passed the “Charlotte’s Web” bill, a measure which allowed the use of low-THC, high-CBD extracts for the purpose of treating a short list of serious conditions such as intractable epilepsy. Lawmakers expanded the program in 2016 to permit terminally ill patients to use medical marijuana, with no restrictions on THC levels. The first dispensary of low-THC cannabis didn’t open until July of 2016.

That same year, advocates were able to get the “Compassionate Medical Cannabis Act of 2014” onto the November 2014 ballot. The bill fell just 2.5% short of the 60% of yes votes needed to pass the constitutional amendment.

The next year, in 2015, a number of municipalities including Miami-Dade County, Tampa, Key West, and Orlando began allowing officers to cite adults found in possession of marijuana rather than arrest them.

Things began to change in 2016 when Amendment 2 passed with a popular vote of 71%. The legislation established a full-blown medical marijuana program. Then, in special session, the senate passed bill SB8A which created strict regulations that applied to Amendment 2, such as making it illegal to purchase dried flower and to grow cannabis at home.

In 2017, the Florida Legislature passed a law to prevent patients from using smokable marijuana. That same year, two bills were introduced to decriminalize possession of small amounts of marijuana. However, the Senate Criminal Justice Committee “temporarily postponed” review of the bills.

In the spring of 2018, Leon County Circuit Court Judge Karen Gievers heard a case brought by People United for Medical Marijuana and Florida for Care on behalf of two medical patients which challenged the legislature’s attempt to restrict patients’ options and prohibit the use of dried cannabis flower. Judge Grievers ruled that patients “have the right to use the smokable forms of medical marijuana for treatment of their debilitating medical conditions as recommended by their certified physicians.”

Sale or delivery of marijuana is a felony. If perpetrated within 1,000 feet of a school, college, park, or other specified area it is punishable by a maximum sentence of 15 years imprisonment and a maximum fine of $10,000.

However, as mentioned above, some Florida municipalities have opted to essentially decriminalize personal use of marijuana. Orlando, for example, allows police officers to write citations rather than arresting offenders. For the possession of 20 grams of cannabis or less, an officer can choose to write a citation with a $100 fine for first-time offenders, or $200 for a second offense. Repeat offenders can be fined up to $500 and have to appear in court.

In certain jurisdictions, payment of the citation constitutes admission of guilt and can still result in a criminal record.

Although Miami-Dade County, Tampa, Key West, and Orlando have decriminalized personal recreational use, many other municipalities still consider weed possession an arrestable offense.